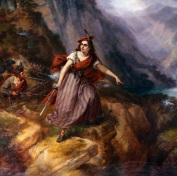 Helen MacGregor, Wife of Rob Roy, in Conflict at the Pass of Loch Ard by Siegfried Detlev Bendixen.

Every year during tax time, I find myself empathizing with a fearsome ancestress of mine, Helen Mary MacGregor (aka Mrs. Rob Roy MacGregor), for at least a moment. While the male head of the ancient Scottish clan was fiercely protective of his kin and an incorrigible and wily attacker of outsiders, his wife was simply terrifying, at least according to Sir Walter Scott’s account in Rob Roy. His story describes the fate of an English government agent sent to the Highlands in 1715 to deliver monies for the King’s soldiers attempting to subdue the locals. Unfortunately, after being robbed of his gold by Mr. MacGregor, he attempted to find a way to get it back and was captured by highlanders led by Mrs. MacGregor. The “Wife of MacGregor” (described by the fictional Rob Roy as “an incarnate devil when her bluid’s up”) had no sympathy for the man of a government trying to kill her husband and ruin her clan and country, and had the poor agent bound, weighted with a “large heavy stone in a plaid,” and thrown into a nearby loch.

Fortunately for government agents in this day and age, they have much more effective and far less dangerous ways of wringing money out of us.

And we all hate it. It seems horribly unfair that we should have to pay so much after working so hard. We worry that the money is misspent (and much of it is) or going to people who have learned how to “work the system” (and some of it is) or going towards projects that are either useless (the infamous Bridge to Nowhere) or that we don’t agree with (i.e., developing new weapons systems or protecting endangered newts).

It’s just hard to sit down every year and watch all that hard-earned money go right back out of your bank account. So there are millions of people who will try to help you keep as much of it as possible using all the tricks of the trade.

But lately some of those tricks have evolved into a whole new way of avoiding taxes and especially so for the already well off.

It turns out that (gasp!)  many wealthy individuals and companies doing business internationally have been hiding large sums of money (up to $100 billion in missing taxes according the U.N conference on trade and development) in offshore tax havens. One reporter observed that the tax havens which we all suspected are hiding massive amounts of money, really are hiding massive amounts of money!

And because most of us do try to pay our taxes in full and on time, this causes a feeling probably not all that dissimilar to French revolutionaries contemplating displacing the heads of the members of the court of Louis XVI from their bodies. Or Massachusetts residents disguised as Indians dumping boxes of tea into Boston Harbor. Or methods such as Mrs. MacGregor’s (the Highlanders were almost always poor) effective means of gaining and holding gold.

As the heads roll in the current Panama Papers crisis (fortunately metaphorically this time as various government officials have simply stepped down), the rest of us are left to contemplate the consequences of these revelations.

One of the major points of contention has been that although these monies were hidden from tax authorities all over the world the people doing the hiding have not done actually done anything illegal. (Note that some countries do have different laws about taking money out of said country (i.e., China), however, and will probably be pursuing a different route. Also, a lot of the money may have been generated using illegal means such as the sale of stolen assets including a lot of fine art apparently.)

However, almost everyone agrees that although it may not be illegal to hide your money in such a way it is definitely immoral and especially so if you are a Third World president/prime minister who is stealing tons of wealth out of a country whose people are starving (especially poor hard-working women who do pay their taxes). And we are not much more sympathetic to those of more modest means but who still dwell in the Realm of the 1% living in wealthy countries but taking money away from developing ones.

Even for those of ordinary means, this is just wrong. Almost every country is currently reviewing their laws on off-shore wealth and I applaud them wholeheartedly. (We may in fact be entering a brave new era not unlike Norway which goes to the extreme of publishing everyone’s income publicly. Yes, everyone. You can check on your neighbors.) We’ve known for a while now that the 1% is growing in a ridiculous manner and the possibility that this growth might be even slightly slowed down deserves a big round of applause. 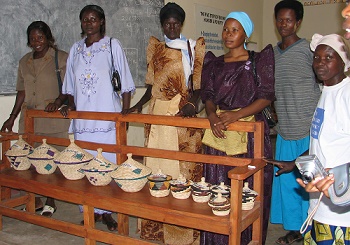 Women entrepreneurs at The Hunger Project-Uganda’s Iganga epicenter in 2008 with their hand-crafted baskets.

A lot of people mistakenly believe that capitalism is fueled by greed but it’s not. Ensuring your family/clan’s financial future in a fair monetary system is not greed. Hoarding gobs of wealth far beyond what you actually need in a corrupt and opaque system that only protects the rich and powerful is greed gone mad. Greed is not good.

Rampant greed is also not going to help make a better world. I’m keeping my fingers crossed that as the stories of the Panama Papers are told over the coming years, and some of that wealth is recovered by tax and law enforcement authorities, that those authorities think to designate a portion to those who need it most, namely those at the bottom of the 99% who dutifully, legally, and painstakingly pay their taxes every year. I think Mrs. MacGregor would agree.

Now back to my regularly scheduled program of filing my own taxes….

Thanks for stopping by,